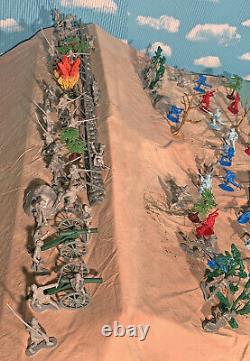 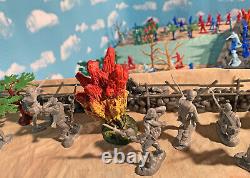 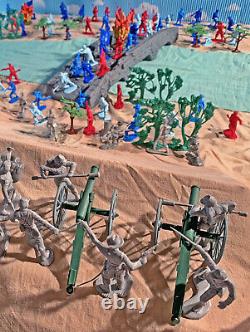 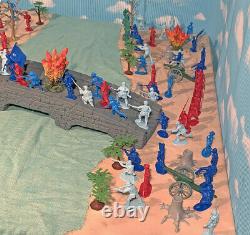 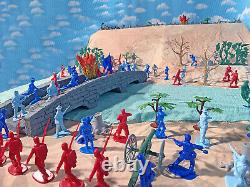 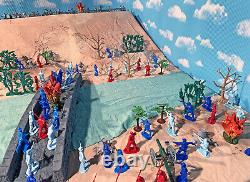 American Civil War Playset #1 - Burnside's Bridge - Battle of Antietam. 136 pieces - 54mm plastic toy soldiers and accessories. (contents may vary slightly depending on availability). The American Civil War Tri-Series set #1 - Antietam. The Civil War began with small engagements but expanded over 4 years to include the largest land battles ever fought in the Western Hemisphere.

This playset provides young collectors with the soldiers and accessories to re-fight the crucial engagement at "Burnside Bridge" during the Battle of Antietam. Having been rebuffed by Robert E. Lee's Army on the right and center of the Confederate position during the morning of April 17th, 1862, the four Union divisions of Major General Ambrose Burnside's IX Corps hoped to turn the Confederate left flank by forcing a bridge across Antietam Creek.

Topography at the bridge heavily favored the few hundred Georgia men who defended it under the leadership of Brig. Robert Toombs (the 2nd and 20th Georgia of Toombs Brigade, the 50th Georgia of Draytons Brigade, and a Company each of Hoods Texas Brigade and Jenkins Brigade). Artillery, Toombs' men took up positions on a bluff overlooking the bridge, and soon the Federals began their assault. One after another, their gallant charges were broken by deadly short-range fire from the Georgians and their cannon.

But after a few hours Union artillery arrived and began hammering the Confederate positions. Two fresh Union regiments, the 51st New York and the 51st Pennsylvania, charged the bridge. Supported by the artillery fire, they were over it before Confederate infantry and artillery volleys could halt them. Soon a wide gap split the Confederate defense and masses of Burnside's troops gained the west bank of the creek. In the photo on the left is the elevated bluff (created by us for the photo - you'll have to build your own), where Toombs' troops and artillery are trying to hold the Federals at bay. In the center is the bridge (a full-sized replica by Form Tech, cast in expanded foam resin) and on the right the Union reinforcements provide covering fire and wait their turn to cross. The figures and accessories from this set can also be used to re-stage battles such as First Bull Run (First Manassas), Seven Pines, Seven Days Battles, Second Bull Run, Shiloh, Fredericksburg, Chancellorsville and others. This is one of three different, but inter-connected, Toy Soldier Company American Civil War Playsets. Each set can stand on its own, but when combined with the other two sets from the same range the resulting collection creates a broad canvas upon which you and your kids can rewrite history! Please note that the contents of each set are almost entirely different from the others in the range.

Reusable Playset box (Set contents may vary). The Toy Soldier Company, founded in 1985, has the world's most extensive stock of current and vintage plastic and metal toy soldiers and accessories by manufacturers including Britains Deetail, Timpo, Atlantic, Dulcop, Conte, Marx originals and recasts, Playmobil and others.